The human brain vasculature is of great medical importance: its dysfunction causes disability and death, and the specialized structure it forms—the blood–brain barrier—impedes the treatment of nearly all brain disorders. Yet so far, we have no molecular map of the human brain vasculature. Now, a team led by researchers at the Stanford University School of Medicine has developed: vessel isolation and nuclei extraction for sequencing (VINE-seq) to profile the major vascular and perivascular cell types of the human brain through 143,793 single-nucleus transcriptomes from 25 hippocampus and cortex samples of 9 individuals with Alzheimer’s disease and 8 individuals with no cognitive impairment. The researchers identified brain-region- and species-enriched genes and pathways. They revealed molecular principles of human arteriovenous organization, recapitulating a gradual endothelial and punctuated mural cell continuum. They discovered two subtypes of human pericytes, marked by solute transport and extracellular matrix (ECM) organization; and defined perivascular versus meningeal fibroblast specialization. In Alzheimer’s disease, the researchers observed selective vulnerability of ECM-maintaining pericytes and gene expression patterns that implicate dysregulated blood flow. With an expanded survey of brain cell types, the researchers found that 30 of the top 45 genes that have been linked to Alzheimer’s disease risk by genome-wide association studies (GWASs) are expressed in the human brain vasculature, and they confirmed this by immunostaining. Vascular GWAS genes map to endothelial protein transport, adaptive immune and ECM pathways. Many are microglia-specific in mice, suggesting a partial evolutionary transfer of Alzheimer’s disease risk. This work uncovers the molecular basis of the human brain vasculature, which will inform our understanding of overall brain health, disease and therapy. 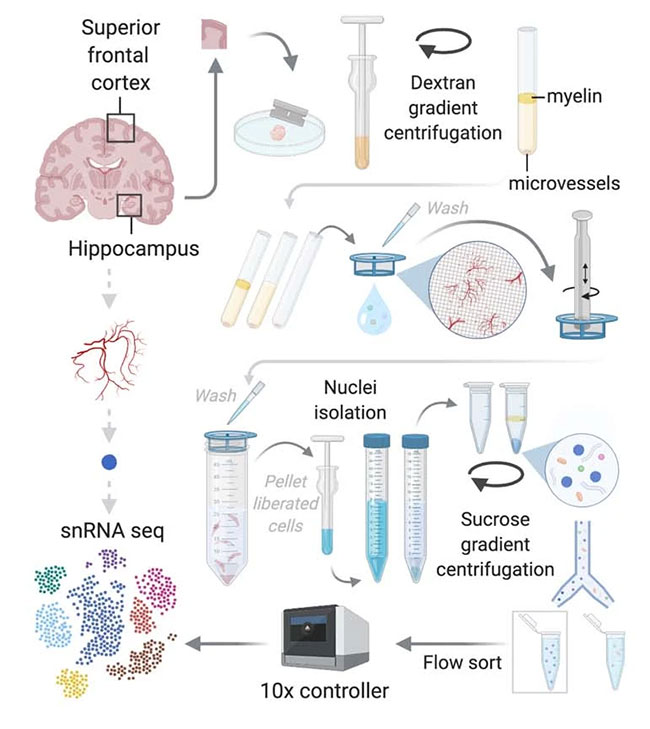 Availability – Data are available to explore via an interactive web browser: https://twc-stanford.shinyapps.io/human_bbb.