Each year 3,000 newborns in the United States are diagnosed with PDA. Infants who are born premature are at greater risk for PDAs. The ductus arteriosus — a temporary blood vessel that connects the aorta and the pulmonary artery — allows blood to flow directly from the heart to the aorta during embryonic development. The vessel normally closes after the birth when smooth muscle cells contract.

“The disease is caused by a defect in a region of brain that is called the neural crest. This part of the brain appears transiently and is important because cells in this region behave like stem cells and contribute to the skull, bone, and cartilage of the face and most importantly the heart,” said Arya Mani, MD, the study’s senior author and a professor of medicine and genetics at the Yale School of Medicine.

The study appears in the journal JCI Insight.

Cardiac NCCs (CNCCs) are essential for the cardiovascular development of an embryo. These migratory, multipotent cells are part of a network that produces melanocytes, neurons, cartilage, and connective tissue in humans.

To test whether decreased PRDM6 was associated with impaired cardiac NCC differentiation, the authors used an in vivo imaging technique called fate mapping. Smooth muscle cells and NCCs were marked with a colored dye and monitored throughout development. This allowed the research team to study cell behavior and genetic characteristics in the developing embryos. The technique demonstrated that decreased PRDM6 expression impaired their migration and differentiation to smooth muscle cells. Using single cell RNA sequencing they were able to show that the upregulation of CNCC specification gene, Wnt1 is causing the cardiac defect. The increased levels resulted in impaired migration, which could be reversed by inhibiting Wnt1. 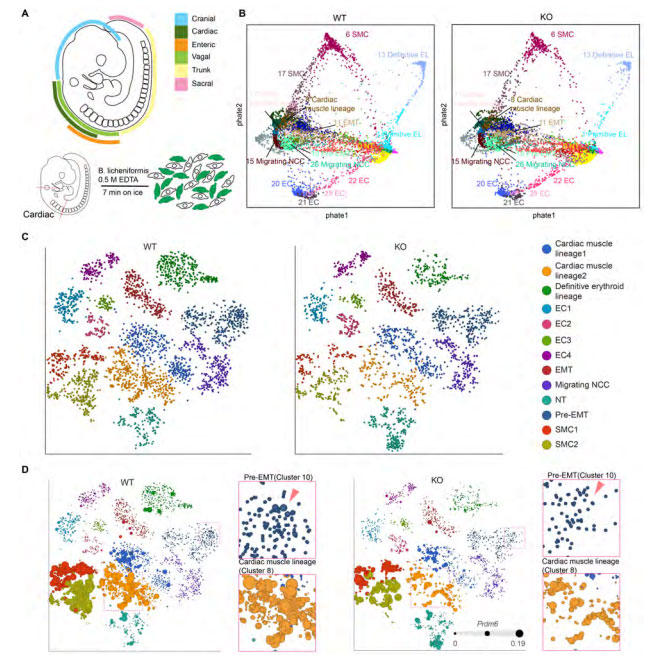 The authors suggest that their findings can be applied to other patients with congenital heart disease caused by epigenetic dysregulation, such as those caused by alcohol or folate-deficiency during pregnancy and possibly bring scientists closer to addressing an unmet need — restoring function to damaged cardiac tissue for millions of patients with cardiovascular disease.

“We gained insight into how environment, such as drug toxicity, or lack of vitamins may cause disease. In a sense, we have insight not only to how disease happens when PRDM6 is deficient, but how many congenital heart diseases occur and can be prevented or cured either by manipulating Wnt1 or by supplementation of nutrients and vitamins that are necessary in mothers and avoiding alcohol or drugs that can impair epigenetic regulation,” said Mani.