You’ve been doing your RNA-Seq all wrong

Researchers at Pfizer Worldwide Research & Development carried out a side-by-side comparison of ‘union exon’-based approach and transcript-based method in RNA-seq gene quantification. It was found that the gene expression levels are significantly underestimated by ‘union exon’-based approach, and the average of RPKM from ‘union exons’-based method is less than 50% of the mean expression obtained from transcript-based approach. The difference between the two approaches is primarily affected by the number of transcripts in a gene. The researchers performed differential analysis at both gene and transcript levels, respectively, and found more insights, such as isoform switches, are gained from isoform differential analysis. The accuracy of isoform quantification would improve if the read coverage pattern and exon-exon spanning reads are taken into account and incorporated into EM (Expectation Maximization) algorithm. This investigation discourages the use of ‘union exons’-based approach in gene quantification despite its simplicity. 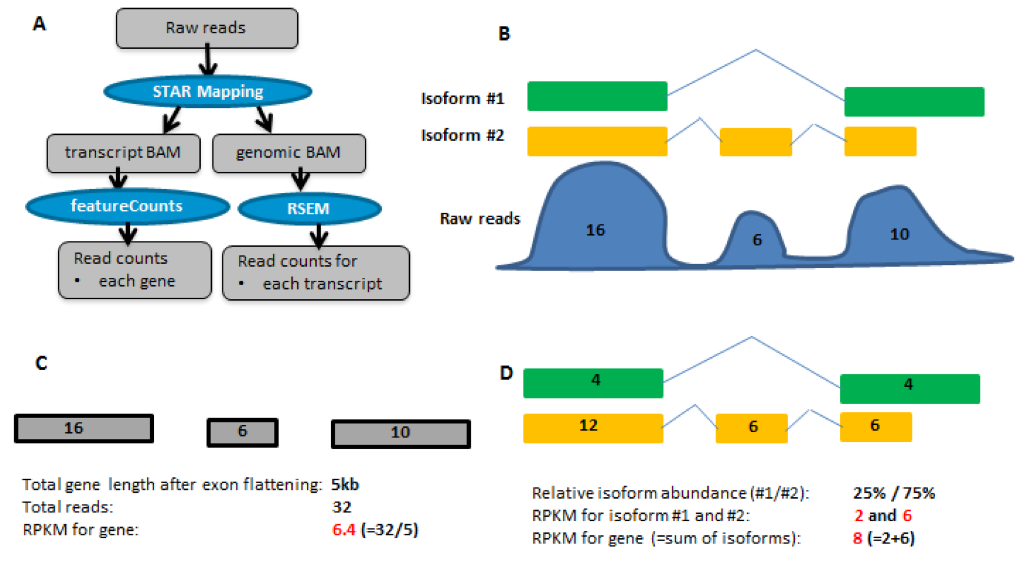 Analysis workflow and illustration of different methods for gene quantification. A) The overall mapping and counting workflow. B) A hypothetical gene, its two isoforms and read coverage profile. Assuming that the sum of mapped reads from all genes is 1 million, and each small and large exon is 1kb and 2kb long, respectively. C) featureCounts results, denoted as fc_rpkm. After exon flattening, the ‘union exons’ are 2 kb, 1 kb and 2 kb long, respectively. The calculated RPKM is 6.4. D) RSEM results, denoted as rsem_txSum_rpkm. Mapped reads are first distributed to individual isoforms, and the expressions for the two isoforms are 2 RPKM and 6 RPKM, respectively. Accordingly, the entire gene expression is 8 RPKM. Note in Fig 1D, the reads distributed to individual isoforms can be added up first, and then the sum of reads is divided by the length of union exons to give rise to rsem_rpkm.