All significantly altered genes greater than 0.5 fold-change were imported into Cytoscape and Gene Ontology clustering was performed with the ClueGO plugin. The human genome was used as the background with the GO biological process and immune system terms queried for enrichment. Terms were generated such that GO Term Fusion was implemented on pathways with a less than 0.01 q-value. Groupings with less than 3 connections were excluded from the final list of networks. Terms related to cytokine and chemokine production as well as general pathogen response formed networks independent of nucleic acid and macromolecule metabolic processes.

The researchers demonstrate for the first time that many of cellular pathways correlate with clinical pathologies following ZIKV infection such as microcephaly, congenital nervous system disorders and epilepsy. Furthermore, ZIKV activates several inflammatory signals within infected hNPCs that are implicated in innate and acquired immune responses, while CMV-infected hNPCs showed limited representation of these pathways. Moreover, several genes related to pathogen responses are significantly upregulated upon ZIKV infection, but not perturbed in CMV-infected hNPCs. 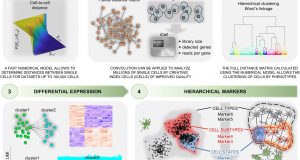